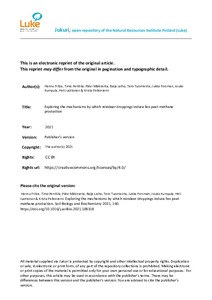 Peatlands, especially fens, are known to emit methane. Reindeer (Rangifer tarandus) use mires mainly as spring and summer pastures. In this work we observed that adding reindeer droppings to fen peat increased the potential methane production by 40%. This became apparent when droppings originating from reindeer kept in pen or pasture in winter were added to methanogenic fen peat samples. The droppings introduced Methanobacteriaceae (Methanobrevibacter; > 90% of the mcrA MiSeq reads) to the peat, which was originally populated by Methanosarcinaceae, Methanosaetaceae, Methanoregulaceae, Methanobacteriaceae, Methanomassiliicoccaceae, Methanocellaceae and Methanomicrobiaceae. The original community structure did not explain the induced methane production and neither did the origin of the droppings. Instead, the increment in methane production was explained by the increased methanogenic abundance, measured by mcrA qPCR, due to the addition of droppings. The result confirms that methanogens from the reindeer rumen participate in peat methane production. This finding suggests that reindeer grazing may increase methane emissions in northern fens.