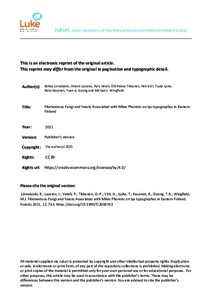 The European spruce bark beetle (Ips typographus) has become a major forest pest in Finland in recent years. The beetle is a well-known vector of mainly ophiostomatoid fungi causing bluestain of timber and pathogens that have the ability to amplify the insect damage. It also vectors other associated organisms, such as phoretic mites. The ecology of these mites remains poorly understood, including their associations with fungi. In this study, we considered filamentous fungi and yeasts associated with mites phoretic on I. typographus. Fungal identifications were based on DNA sequences and phylogenetic analyses of the ITS and/or partial beta-tubulin gene regions. Fifteen fungal species were detected, including eight yeasts and seven filamentous fungi. Eleven percent of the beetles carried mites and of these 74% carried at least one fungal species. An average of two fungal species were carried per mite. The most commonly found filamentous fungi were Grosmannia penicillata (25%), Ophiostoma bicolor (19%), O. ainoae (12%) and O. brunneolum (12%). Of the yeast species, the most commonly found was Wickerhamomyces bisporus (47%). This study is the first to report yeasts associated with I. typographus and its phoretic mites in Finland. Majority of the filamentous fungal species found are those previously reported in association with I. typographus. The results also confirmed that many of the fungal species commonly found on I. typographus are also associated with its phoretic mites. However, the nature of the symbiosis between the mites, beetles and fungal associates remains to be understood.