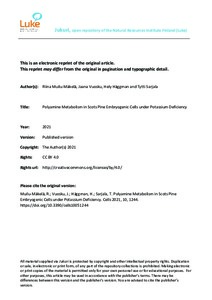 Polyamines (PA) have a protective role in maintaining growth and development in Scots pine during abiotic stresses. In the present study, a controlled liquid Scots pine embryogenic cell culture was used for studying the responses of PA metabolism related to potassium deficiency. The transcription level regulation of PA metabolism led to the accumulation of putrescine (Put). Arginine decarboxylase (ADC) had an increased expression trend under potassium deficiency, whereas spermidine synthase (SPDS) expression decreased. Generally, free spermidine (Spd) and spermine (Spm)/ thermospermine (t-Spm) contents were kept relatively stable, mostly by the downregulation of polyamine oxidase (PAO) expression. The low potassium contents in the culture medium decreased the potassium content of the cells, which inhibited cell mass growth, but did not affect cell viability. The reduced growth was probably caused by repressed metabolic activity and cell division, whereas there were no signs of H2O2-induced oxidative stress or increased cell death. The low intracellular content of K+ decreased the content of Na+. The decrease in the pH of the culture medium indicated that H+ ions were pumped out of the cells. Altogether, our findings emphasize the specific role(s) of Put under potassium deficiency and strict developmental regulation of PA metabolism in Scots pine.