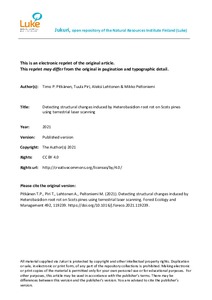 Root rot, caused by the decay fungus Heterobasidion annosum, damages both below- and above-ground parts of Scots pines (Pinus Sylvestris L.). The diseased pines are often first characterized by deteriorated crowns and they will eventually be killed by the infection, but the process is gradual and difficult to be observed before the symptoms are severe. We tested the applicability of point cloud data produced by terrestrial laser scanning (TLS) for quantifying the structural differences between the healthy and the diseased trees. This approach was applied in a mature pine stand in southern Finland, which was known to be infected by H. annosum. We first scanned the stand using TLS, and thereafter felled the trees for detailed inspection and classification of the infection status. From the TLS point cloud, we estimated i) crosscut areas within the lowest 1 m of the stem, identifying potential deformations initiated by the fungus, ii) degree of crown deterioration, often providing the first visual signs of the infection at the level of individual trees, and iii) crown occupancy and open space around the trees, prone to be altered by the mycelial spread of the fungus between the adjacent trees. The results indicate that differences in both stem dimensions and crown deterioration can be detected between the healthy and the diseased trees. The diseased trees were found to have a more swollen butt, but no irregularities in circularity of the crosscuts were detected. In terms of vertical point distribution, the diseased trees had point accumulations at substantially greater heights, reflecting easier penetration of laser beams and sparsity of the crown. Regarding to crown occupancy, the diseased trees had more open space around their crowns, but difference to the healthy trees was not statistically significant. According to a simple prediction test based on the calculated features, up to 85% classification accuracy of the infection status was reached. This study is the first indication that TLS can successfully be applied for detecting structural changes of Scots pines connected to Heterobasidion root rot. Our results also show evidence that H. annosum causes butt swelling, which has rarely been reported as a symptom for Scots pines.