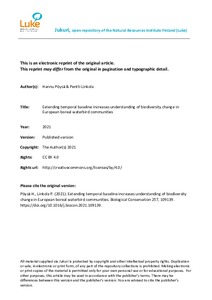 Setting relevant temporal baselines is critical to understanding biodiversity change and the full impact of various pressures on biodiversity. Current knowledge of biodiversity change in European boreal waterbird communities is based on monitoring and other data from the last 35 years. However, the impact of the presumed main drivers of changes in these communities, i.e., eutrophication and alien predators, started decades before this. We used data of 35 breeding waterbird communities, representing both oligotrophic and eutrophic lakes, in southern Finland from 1951–1970 and 1996–2015 to study changes in biodiversity against a baseline from a period when the presumed main drivers were not yet fully effective. We found that species richness increased from 1951–1970 to 1996–2015 at oligotrophic lakes but not at eutrophic lakes; total abundance in turn increased at the former lake type but decreased at the latter. Breeding numbers of many historically abundant species declined at the eutrophic lakes to such a degree that the increases of other species were not sufficient to compensate for the declines. Population increases prevailed at the oligotrophic lakes and the slight declines of some previously less abundant species, were compensated for. The species level results revealed that local abundances of different species likely are affected by different drivers, suggesting that we need an autecological approach in the conservation management of boreal waterbird communities. Increased predation risk rather than eutrophication appeared to be the main biodiversity stressor in the waterbird communities studied.