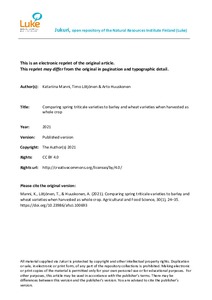 Two plot experiments in two consecutive years were conducted to compare spring triticale varieties to spring barley and spring wheat varieties to produce whole crop cereals for ruminants. In the first year, triticale varieties Nagano and Nilex, barley varieties Kaarle and Trekker, and the wheat variety Helmi were studied. In the second year, the triticale varieties Bikini and Somtri and the barley variety Armas were also used. The crops were harvested at the early dough stage of ripening. A treatment with reduced fertilizer and seed rates was included to study their effects on the development of the undersown ley, but such effects could not be demonstrated. The triticale varieties except for Bikini produced high dry matter yields. The highest ear:stem ratio and pepsin-cellulase solubility in the ear were found in the barley varieties Armas and Kaarle, but the digestibility of the whole crop was not improved because of low pepsin-cellulase solubility of the stems or leaves. All the studied varieties were suitable for whole crop production. The production costs of the different types of whole crop silage were fairly similar.