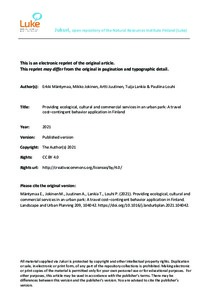 The need for monetary valuation of recreational ecosystem services in urban areas is greatly acknowledged in several contexts. Most often, studies provide a total value of recreational visits, but a separate contribution of ecosystem, cultural, and commercial services to the value of recreation in urban ecosystems is rarely provided. In this study, the recreational importance of an urban park including streams is assessed, and the welfare impli-cations of planned future improvements in three types of service are revealed, i.e. the restoration of the reproductive brown trout population, an increased number of happenings or events, and the service of a cafeteria-restaurant. Travel cost and contingent behavior methods are combined, which has not previously been applied in such a context. The results show that people perceive the park’s importance for their well-being. The improvements of each service separately tended to increase the value between 14% and 21%, and of all services simultaneously by 66%. Remarkably, individuals with low incomes valued the park more than wealthier in-dividuals. As the park is a free access environment, this suggests that the improvement of its recreational pos-sibilities may especially benefit those with fewer opportunities for chargeable free time activities. Respondents’ awareness of the reconstruction and management project of the park and the streams tended to increase the number of visits to and value of the park. At the societal level, the stream restoration was found to be highly profitable.