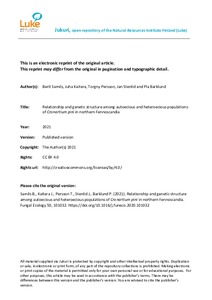 Epidemics of Scots pine blister rust, caused by Cronartium pini, have become an increasing problem in northern Finland and Sweden. The biology of the rust fungus is complex, with two different life cycle forms that cannot be morphologically distinguished, and it is unclear to what extent the two forms contribute to the epidemics. Genetic structure of fourteen populations of C. pini were investigated in Fennoscandia. Distinction between the two life cycle forms, a heteroecious and an autoecious one, was made by determining zygosity using microsatellite markers, and AFLP markers were developed to analyse population genetic relationships. The results showed that the two life cycle forms are clearly differentiated and occur in separate populations. Within the life cycle forms, geographic differentiation was evident, probably due to restricted gene flow as well as connection with different alternating hosts. The host-alternating form dominated in the epidemic regions in northern Fennoscandia. Implications for silvicultural practices are discussed.