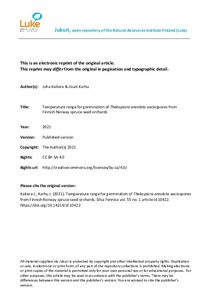 Cherry-spruce rust caused by Thekopsora areolata (Fr.) Magnus is a serious cone pathogen of Norway spruce [Picea abies (L.) Karst.]. The rust causes great economical losses in seed orchards specialized in the production of high quality seeds. Germination range of T. areolata aeciospores from rust populations (spore sources) in seven Finnish Norway spruce seed orchards was tested on water agar and malt agar at nine temperatures varying between 6–30 °C. The temperature range of spore germination was high varying between 6 °C and 27 °C, while germination was retarded at 30 °C. The peak in germination rate of all spore sources occurred between 15–24 °C. In a model with fixed effects of agar media, temperature and spore source, temperature had the most significant effect on germination. Spore source had a less significant effect, while agar media had a non-significant effect on germination. The rust was able to germinate at low temperatures corresponding to temperatures when the thermal growing season starts at 5 °C in the spring. As spores from cones from both the spruce canopy and the ground showed very similar germination ranges, it indicated the great capacity of all spores of the rust to germinate early in the spring. Hot temperatures with over 30 °C drastically reduced germination of the rust.