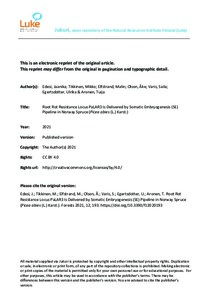 The Norway spruce somatic embryogenesis (SE) pipeline is suitable for multiplication of material with root rot resistance traits. Background and Objectives: Heterobasidion root rot is the economically most severe forest pathogen in Europe, reducing the benefit of planting elite forest material. In this study, the SE-propagation ability of elite Norway spruce material carrying root rot resistance traits was studied. Materials and Methods: We analyzed the presence of the root rot resistance locus PaLAR3B among 80 Finnish progeny-tested Norway spruce plus-trees used for SE-plant production as well as in 241 SE lines (genotypes) derived from them. Seven full-sib families with lines having either AA, AB, or BB genotype for PaLAR3 locus were further studied for their SE-plant propagation ability. Results: The results indicate that 47.5% of the studied elite trees carry the PaLAR3B allele (45% are heterozygous and 2.5% homozygous). The resistance allele was present among the SE lines as expected based on Mendelian segregation and did not interfere with somatic embryo production capacity. All embryos from PaLAR3 genotypes germinated well and emblings were viable in the end of first growing season. However, in three families, PaLAR3B homo- or heterozygotes had 23.2% to 32.1% lower viability compared to their respective hetero- or PaLAR3A homozygotes. Conclusions: There is no trade-off between root rot resistance locus PaLAR3B and somatic embryo production ability, but the allele may interfere with Norway spruce embling establishment.