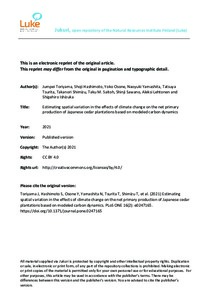 Spatiotemporal prediction of the response of planted forests to a changing climate is increasingly important for the sustainable management of forest ecosystems. In this study, we present a methodology for estimating spatially varying productivity in a planted forest and changes in productivity with a changing climate in Japan, with a focus on Japanese cedar (Cryptomeria japonica D. Don) as a representative tree species of this region. The process-based model Biome-BGC was parameterized using a plant trait database for Japanese cedar and a Bayesian optimization scheme. To compare productivity under historical (1996–2000) and future (2096–2100) climatic conditions, the climate scenarios of two representative concentration pathways (i.e., RCP2.6 and RCP8.5) were used in five global climate models (GCMs) with approximately 1-km resolution. The seasonality of modeled fluxes, namely gross primary production, ecosystem respiration, net ecosystem exchange, and soil respiration, improved after two steps of parameterization. The estimated net primary production (NPP) of stands aged 36–40 years under the historical climatic conditions of the five GCMs was 0.77 ± 0.10 kgC m-2 year-1 (mean ± standard deviation), in accordance with the geographical distribution of forest NPP estimated in previous studies. Under the RCP2.6 and RCP8.5 scenarios, the mean NPP of the five GCMs increased by 0.04 ± 0.07 and 0.14 ± 0.11 kgC m-2 year-1, respectively. The increases in annual NPP were small in the southwestern region because of the decreases in summer NPP and the small increases in winter NPP under the RCP2.6 and RCP8.5 scenarios, respectively. Under the RCP2.6 scenario, Japanese cedar was at risk in the southwestern region, in accordance with previous studies, and monitoring and silvicultural practices should be modified accordingly.