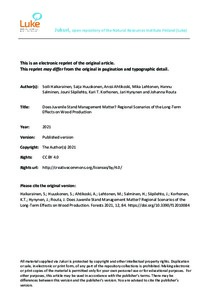 We analysed the regional level effects of juvenile stand management (early cleaning and precommercial thinning), shortly termed tending on wood production and the profitability of forest management. Altogether ca. 0.4 million hectares of juvenile stands from two significant forestry regions of Finland, South and North Savo, were examined. We used plot-level data of the 11th National Forest Inventory to represent the current status of juvenile stands in the study area, and the Motti stand simulator to predict the future developments of those stands for the next 100 years. We applied three scenarios: (i) Timely tending, (ii) delayed tending, and (iii) no tending, to examine differences between these alternative levels of juvenile stand management. The results showed the benefits of tending at a regional level. Timely tending was the most profitable option when low or modest interest rates (2–3%) were applied in the assessment. Even a short delay in tending clearly increased the tending costs. Delaying and neglecting tending resulted in significant losses, especially in sawlog removals and stumpage earnings. The financial gain from tending was the highest on fertile sites. Due to the high growth rate of trees, the situation may change very quickly on such sites. For the operational forestry, this means that fertile sites should have a high priority when conducting timely tendings.