Expert Views on the Future Development of Biogas Business Branch in Germany, The Netherlands, and Finland until 2030 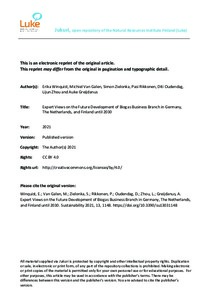 To be able to meet the European Union’s energy and climate targets for 2030, all member states need to rethink their energy production and use. One potential renewable energy source is biogas. Its role has been relatively small compared to other energy sources, but it could have a more central role to solve some specific challenges, e.g., to reduce carbon dioxide (CO2) emissions from traffic, or to act as a buffer to balance electricity production with consumption. This research analyses how the future of the biogas business in three case study countries is developing until 2030. The study is based on experts’ views within the biogas business branch in Germany, The Netherlands, and Finland. Both similarities and differences were found among the experts’ answers, which reflected also the current policies in different countries. The role of biogas was seen much wider than just to provide renewable energy, but also to decrease emissions from agriculture and close loops in a circular economy. However, the future of the biogas branch is much dependent on political decisions. To be able to show the full potential of biogas technology for society, stable and predictable energy policy and cross-sector co-operation are needed.