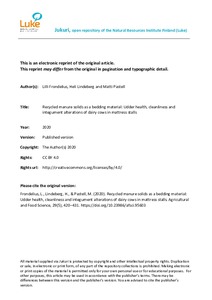 Interest in using recycled manure solids (RMS) as a bedding material for dairy cattle is increasing, but suitable information for Nordic housing conditions is scarce. The aim of our study was to investigate the effect of RMS bedding on dairy cow welfare compared to peat bedding commonly used in Finland. We conducted a 2 × 3-month cross-over study with two groups of 24 lactating dairy cows, where first three months one group was housed with RMS-bedding and the other group with peat-bedding and then vice versa for the next three months. We followed integument alterations, cleanliness of the animals and udder health fortnightly. With RMS bedding cows had less severe integument alterations in tarsal joints (p=0.0031) and their udders were cleaner (p=0.0109) compared to peat. Somatic cell count did not differ between bedding materials, but link between RMS bedding and the small number of cases of clinical mastitis cannot be ruled out. Based on this study, RMS could provide an economical and renewable bedding source for Nordic dairy farms, with no major effects on animal welfare.