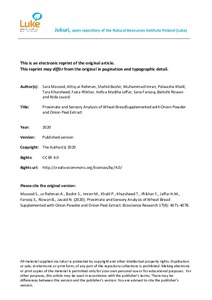 In current era, the agro-waste production is tremendously increasing which strongly influences the stability of the ecosystem and ultimately the human health. Onion is among one of the most commonly consumed vegetables worldwide, but its peel is generally regarded as waste, which is rich in various phytonutrients. Wheat bread is consumed as a staple food by large number of populations hence this study was aimed at improving the nutritional quality of bread by supplementing it with onion peel extract (OPE) and onion powder (OP). A control bread was synthesized using standard formulation while breads supplemented with OPE and OP were prepared by substituting wheat flour with OPE and OP at 1%, 3% and 5%, 7% respectively. Proximate analysis of five types of bread (A, B, C, D, E) presented that addition of onion peel extract significantly (p < 0.05) improved the moisture content (21.06-21.79%) of breads while incorporation of onion powder brought significant improvement in fiber (0.24-0.32%), protein (9.80-10.35%) and ash content (1.55-1.94%). Sensory analysis of the breads was done by a semi-trained panel constituting of 7 members. Significant differences were reported among the five treatments for appearance, texture, taste, odor and overall acceptability. Maximum score for all the above-mentioned attributes was obtained by 1% OPE fortified bread while the 7% onion powder fortified bread attained the lowest scores. The sensory attributes of OPE makes it a good flavoring ingredient for baked items