A large wild salmon stock shows genetic and life history differentiation within, but not between, rivers 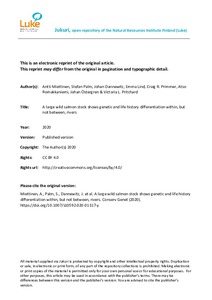 Anadromous salmonid fishes frequently exhibit strong geographic population structuring. However, population genetic differentiation of Atlantic salmon (Salmo salar) at fine geographic scales differs across equivalent spatial extents in different regions. So far, fine-scale genetic differentiation has not been assessed in rivers of the Baltic Sea, a region that contains an evolutionarily distinct Atlantic salmon lineage. Thus, Baltic salmon are currently managed on the river level, without focus on potential genetic structure and diversity within rivers. Here, we used microsatellites to characterize the genetic structure of wild juvenile salmon sampled throughout the interconnected, northern Baltic Tornio and Kalix Rivers. We found genetic differentiation within the two rivers, but not between them: salmon in the upper reaches differed from individuals in the lower reaches, regardless of river system. Further, examining smolts migrating from the river to the sea and adults returning from the sea to spawn, we found an association between the genetic structure and seasonal migration timing. Out-migrating smolts genetically assigned to upper river reaches were older and tended to reach the sea later in the season than smolts from the lower reaches. In contrast, mature adults originating from the upper reaches returned to the river early in the season. Our observation of genetic population structuring between downstream and upstream reaches of the large Tornio and Kalix rivers, and its association with migration timing, implies that careful temporal management of the northern Baltic fisheries would help to preserve the diversity and sustainability of the wild salmon stocks of these rivers.