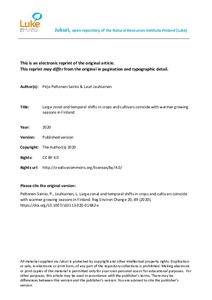 In Finland, crop choices are limited, and cultivation is only possible in the regions where production risks and uncertainties are manageable. Climate change progresses rapidly at high latitudes and the thermal growing season is projected to become substantially longer in the future. This study aimed to monitor the regional shifts in major, secondary, minor and novel crops during 1996–2016 in Finland. We used long-term data from the Finnish Food Agency and evaluated changes in time to reach maturity of cultivars of model crops by using official variety trial data. Substantial changes were recorded in cultivation areas of crops, including expansion into new regions. Some of the traditional major crops such as oats (− 20%, i.e. − 75,700 ha from 1996 to 2016), barley (− 19%, − 105,700 ha) and potatoes (− 28%, − 4000 ha) have paved the way for emergent crops like faba beans (increase in area from 58 to 14,800 ha), peas (from 5700 to 13,400 ha), caraway (from 1900 to 18,400 ha) and spring oilseed rape (from 700 to 27,800 ha). Expansion per se was primarily enabled by climate warming, but success requires well-adapted cultivars, existing or emerging markets and industries or exports as well as motivating prices, policy support and valued ecosystem services.