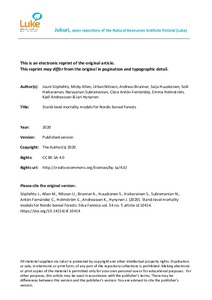 New mortality models were developed for the purpose of improving long-term growth and
yield simulations in Finland, Norway, and Sweden and were based on permanent national forest
inventory plots from Sweden and Norway. Mortality was modelled in two steps. The first model
predicts the probability of survival, while the second model predicts the proportion of basal area
in surviving trees for plots where mortality has occurred. In both models, the logistic function was
used. The models incorporate the variation in prediction period length and in plot size. Validation
of both models indicated unbiased mortality rates with respect to various stand characteristics
such as stand density, average tree diameter, stand age, and the proportion of different tree species,
Scots pine (Pinus sylvestris L.), Norway spruce (Picea abies (L.) Karst.), and broadleaves.
When testing against an independent dataset of unmanaged spruce-dominated stands in Finland,
the models provided unbiased prediction with respect to stand age.