Development of Lake Vesijärvi through four decades of remediation efforts 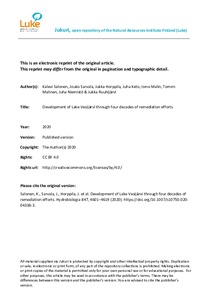 The diversion of sewage inputs in the mid-1970s led to an order of magnitude reduction in nutrient loading to Lake Vesijärvi, southern Finland. After the diversion, nutrient concentrations declined, consistent with a simple dilution model, and by the mid-1990s the chlorophyll concentration was reduced by 80%. The favourable development was supported by a 5-year mass removal of planktivorous and benthivorous fish and the stocking of predatory pikeperch (Sander lucioperca (L.)), although the exact mechanisms behind their effects remain obscure. Starting in 2010, oxygen-rich water from the top of the water column was pumped to the deepest parts of the lake, resulting in high deepwater oxygen concentration in winter. In summer, hypoxic or even anoxic conditions could not be avoided, but the duration of the anoxic period was markedly shortened. Because nitrate was never depleted, leaching of total nitrogen from the sediment was reduced and the same was also true for total phosphorus, but only in winter. The oxygenation stabilized deepwater nutrient concentrations to a low level, but this was not reflected in the epilimnetic total nutrient concentration or in a further decrease in the chlorophyll concentration.