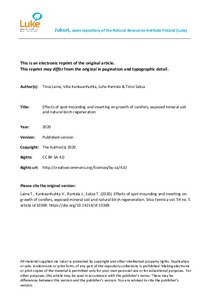 In Nordic forests, consistent evidence about better seedling survival rate and increased growth due to site preparation have been obtained in numerous studies. Proper site preparation method can reduce costs of the whole regeneration chain through its effects on survival of planted seedlings, abundance of natural regeneration and competition in early stand development. This study compared the natural regeneration of birches (silver birch (Betula pendula Roth) and downy birch (B. pubescens Ehrh.)), amount of exposed mineral soil, and growth of planted seedlings between spot mounding and inverting site preparation methods. Present study was conducted in eight forest stands established in 2012 or 2015. Even though difference was not statistically significant, inverting exposed less mineral soil than spot mounding and thus reduced the natural regeneration of birch seedlings by 6135 seedlings ha–1 compared to spot mounding. However, the variation between regeneration areas was remarkable. There was no difference in seedling mortality or growth between the site preparation methods. In order to achieve high growth of conifers, moderate amount of exposed mineral soil and thus less naturally regenerated birch, inverting should be favored over spot mounding.