The legitimacy of result-oriented and action-oriented agri-environmental schemes: A comparison of farmers’ and citizens’ perceptions 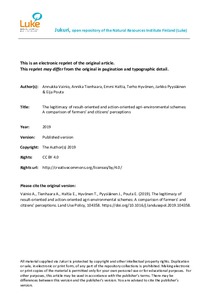 Farmers’ and citizens’ perceptions of the legitimacy of the current action-oriented and the proposed result-oriented agri-environmental schemes (AES) are poorly known. To help fill this gap, this study analysed such perceptions in the context of Finnish citizens and farmers. Hypotheses on legitimacy, ecosystem service perceptions and environmental values were developed and empirically tested with nationwide surveys of Finnish citizens (n = 1,744) and farmers (n = 1,215) using t-test and multiple linear regression. The results demonstrated that Finnish citizens perceive the proposed result-oriented AES as more legitimate, whereas Finnish farmers attribute greater legitimacy to the current action-oriented AES. Among both groups, a preference for action-oriented AES, and reluctance to change them, was associated with the perception that Finnish agriculture has been successful in producing ecosystem services. Among both groups, environmental preferences were associated with the legitimation of both AES. The conclusion is that in order for a change in AES to be legitimate, that change should be perceived as necessary, justified and based on the values considered important by farmers and citizens.