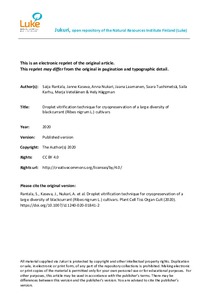 The aim of plant gene banks is to preserve genetic resources selected based on their phenotypic, agronomic, historical or other cultural values for future utilization. In the present study the modified PVS2 droplet vitrification technique was tested and optimized for cryopreservation of a large diversity of blackcurrant (R. nigrum L.) accessions propagated in vitro and selected into a national gene bank core collection. Out of four accessions tested to optimize the method, three recovered and regenerated by 89–97% on average, but one recalcitrant in vitro line only by 25%. The tested post-cryopreservation recovery media with different macronutrient and growth regulator levels showed no generalized effect on regenerated shoots, but the effect of recovery media was different between cultivars. When the whole regeneration chain from cryopreservation via micropropagation to greenhouse conditions was tested, shoots at least 1 cm in length were found necessary for successful transfer ex vitro. The long-term cryopreservation of 22 blackcurrant accessions was finally conducted, with practices slightly modified from the tested protocol. The estimated recovery of shoot tips after 9 weeks in vitro was 17–94% with at least 75% recovery in seven accessions and at least 40% recovery in 19 out of 22 accessions. Only one accession had no cryopreservation success. The results demonstrated that the modified droplet vitrification technique is appropriate for a large diversity of blackcurrant accessions. However, cultivar-related differences and recovery procedures are to be considered for success in regeneration and ex vitro adaptation.