Fate of Antioxidative Compounds within Bark during Storage: A Case of Norway Spruce Logs 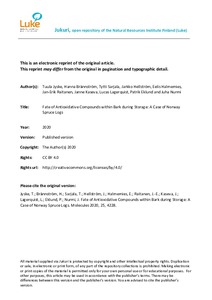 Softwood bark is an important by-product of forest industry. Currently, bark is under-utilized and mainly directed for energy production, although it can be extracted with hot water to obtain compounds for value-added use. In Norway spruce (Picea abies [L.] Karst.) bark, condensed tannins and stilbene glycosides are among the compounds that comprise majority of the antioxidative extractives. For developing feasible production chain for softwood bark extractives, knowledge on raw material quality is critical. This study examined the fate of spruce bark tannins and stilbenes during storage treatment with two seasonal replications (i.e., during winter and summer). In the experiment, mature logs were harvested and stored outside. During six-month-storage periods, samples were periodically collected for chemical analysis from both inner and outer bark layers. Additionally, bark extractives were analyzed for antioxidative activities by FRAP, ORAC, and H2O2 scavenging assays. According to the results, stilbenes rapidly degraded during storage, whereas tannins were more stable: only 5–7% of the original stilbene amount and ca. 30–50% of the original amount of condensed tannins were found after 24-week-storage. Summer conditions led to the faster modification of bark chemistry than winter conditions. Changes in antioxidative activity were less pronounced than those of analyzed chemical compounds, indicating that the derivatives of the compounds contribute to the antioxidative activity. The results of the assays showed that, on average, ca. 27% of the original antioxidative capacity remained 24 weeks after the onset of the storage treatment, while a large variation (2–95% of the original capacity remaining) was found between assays, seasons, and bark layers. Inner bark preserved its activities longer than outer bark, and intact bark attached to timber is expected to maintain its activities longer than a debarked one. Thus, to ensure prolonged quality, no debarking before storage is suggested: outer bark protects the inner bark, and debarking enhances the degradation.