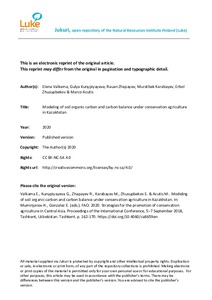 Traditional farming systems, involving intensive tillage, returning the low amounts of organic matter to field and frequently monoculture, lead to a decrease in soil organic carbon (SOC) and land degradation. In contrast, conservation agriculture (CA) has a large potential for carbon sequestration. However, the efficacy of no-till agriculture for increasing C in soils has been questioned in recent studies. These doubts stem from the facts that previous literature on soil C stocks has often discussed effects of tillage, rotations, and residue management separately. The objectives of this study are (1) to assess the potential of each CA component for soil C sequestration in Almaty state (Kazakhstan), proposing a methodology that could be extended to other conditions in Kazakhstan; and (2) to estimates CO2 balance and possibility to obtain carbon credits. Modeled results showed that no tillage with crop rotation and residue retained and/or cover crop increased SOC by about 300–1 000 kg-1 ha-1 yr-1 in the ploughing layer. It seems that the contribution of each CA element into SOC stock decreased in the following order: cover crops > residues > rotation. In particular, attention should be paid to cover crops, which seem to have significant role in C sequestration, but are not yet widely spread in practical farming in Kazakhstan. Conservation agricultural practices involving, in addition to no-tillage, crop rotation, residues retained and/or cover crops allowed achieving the objective of 4 per 1 000 initiatives. The initiative claims that an annual growth rate of 0.4 percent in the soil carbon stocks, or 4‰ per year, would halt the increase in the CO2 concentration in the atmosphere related to human activities. In addition, these CA practices had the negative total carbon balance indicating reduction of GHG emissions and indicating possibility to obtain carbon credits.