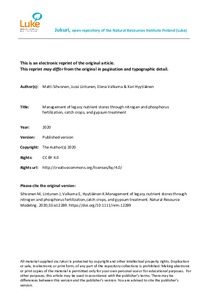 We develop a modeling framework, based on discrete‐time dynamic optimization, to study the effect of legacy nutrient stores and soil nutrient dynamics on optimal nutrient management and agri‐environmental policy in crop production. Three alternative measures are studied to reduce nutrient loss: reduced fertilization, nonlegume catch crop cultivation and gypsum amendment. According to our results, landowner can bring down excessively high phosphorus stocks causing environmental damage within decades, by simultaneous optimization of the nitrogen and phosphorus fertilizers on the economic basis of profit maximization. Our results suggest that nitrogen loss abatement with catch crops is socially optimal, whereas the use of gypsum is well justified as a temporary measure on soils with high soil phosphorus levels. A dynamic tax‐subsidy‐scheme, which takes into account the current soil nutrient levels and field attributes such as soil texture, can enforce the socially optimal outcome. The welfare losses of the static steady‐state‐based tax‐subsidy‐schemes are increasing functions of the legacy nutrient stores and soil's ability to hold nutrients.

We develop a modeling framework to study the effect of the legacy nutrient stores and the soil nutrient dynamics on the optimal nutrient management and agri‐environmental policy in crop production.

A dynamic tax‐subsidy‐scheme, which is adjusted annually according to the soil nutrient stocks, leads to social optimum. Although this can be difficult to implement in practice, it can be useful in the derivation of the simpler, static tax‐subsidy‐schemes.

If a gypsum subsidy is paid for those years, where the soil P level is above the threshold level for the gypsum application, the welfare loss of the static steady‐state‐based tax‐subsidy‐schemes is almost zero.

Simultaneous adjustment of the N and P fertilizer rates enables the use of simple, static and soil‐texture‐ignorant tax‐subsidy schemes, without a notable social welfare loss