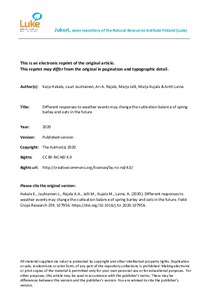 The major elements determining the yield potential of crops during the growing period are temperatures and precipitation patterns. In this study, the effects of temperature and precipitation at key growth phases on yield formation of oats (Avena sativa L.) and barley (Hordeum vulgare L.) were compared using the Finnish official variety trial data (VCU, Value for Cultivation and Use) and farm data (FD) for the period from 1976 to 2018. We examined data of the early growth (0–28 days after sowing), determination of grain number (0–21 days before heading), early grain filling (0–21 days after heading) and the whole growing period. The average yield potential of oats was 300–370 kg ha−1 higher than that of barley until the turn of the century. Since 2007, the yield of barley has been on average 376 kg ha−1 higher than that of oats (VCU data). In FD, the yield advantage of barley was evident 10 years earlier (starting from 1997). In the VCU data, there were few major differences in the yield potentials of oats and barley due to different weather events, but when significant differences occurred, they were in favor of oats. In practical farming (FD), the yields of barley were slightly but significantly higher than those of oats in most studied weather events. Oat yields were higher in the FD only when high precipitation occurred during early grain filling or on average during the whole growing period. The results indicate that the predicted higher precipitation and the increased risk of heavy rain events in the future warmer climate will threaten barley production more than oats, unless new flood tolerant varieties are introduced. Early sowing and cool early growth periods are beneficial to both crops. Barley is more sensitive than oats to delayed sowing and to an increase in the temperatures during early growth. During the periods of grain number determination and early grain filling, low temperatures resulted in significantly higher yields in oats than in barley in the VCU data, but at higher temperatures this difference disappeared. This indicates similar tolerance of slight temperature increases in both crops at these growth phases. Temperatures above 28 °C during the time frame of anthesis decreased the yields of both crops, with oat yields decreasing more than those of barley. This calls for introduction of new, heat tolerant varieties of both crops, but especially of oats, in the warmer future climate. When the growing period was longer than average or when the precipitation during the growing season was high, barley yields were significantly lower than those of oats in the VCU data and about equal to oats in the FD. Low and medium precipitation levels resulted in no differences in the yields of the two crops in any of the studied growth stages in the VCU data. This contradicts the assumption that oats need more water for yield formation than barley. Climate change will challenge crop production in Finland and globally. Availability of nationally and locally suitable crop varieties will help farmers to prepare and respond to climate change.