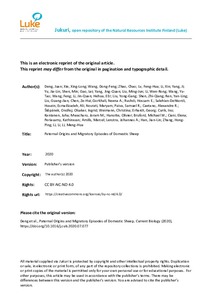 The domestication and subsequent global dispersal of livestock are crucial events in human history, but the migratory episodes during the history of livestock remain poorly documented. Here, we first developed a set of 493 novel ovine SNPs of the male-specific region of Y chromosome (MSY) by genome mapping. We then conducted a comprehensive genomic analysis of Y chromosome, mitochondrial DNA, and wholegenome sequence variations in a large number of 595 rams representing 118 domestic populations across the world. We detected four different paternal lineages of domestic sheep and resolved, at the global level, their paternal origins and differentiation. In Northern European breeds, several of which have retained primitive traits (e.g., a small body size and short or thin tails), and fat-tailed sheep, we found an overrepresentation of MSY lineages y-HC and y-HB, respectively. Using an approximate Bayesian computation approach, we reconstruct the demographic expansions associated with the segregation of primitive and fat-tailed phenotypes. These results together with archaeological evidence and historical data suggested the first expansion
of early domestic hair sheep and the later expansion of fat-tailed sheep occurred 11,800–9,000 years BP and 5,300–1,700 years BP, respectively. These findings provide important insights into the history of migration and pastoralism of sheep across the Old World, which was associated with different breeding goals during the Neolithic agricultural revolution.