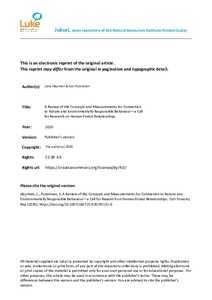 A Review of the Concepts and Measurements for Connection to Nature.pdf (560.2Kt)
Lataukset

Purpose of Review The review examines recent scientific discussion on the concepts and measurements of human connection to nature (CTN) and pro-environmental behaviour (PEB). In addition to that, we explore the environmental contexts in which study populations are exposed to nature or nature experiences, particularly the contexts in which forests emerge from these studies, and lastly outline gaps in research.
Recent Findings Outlining the association between CTN and PEB has been widely researched over the past 5 years. The concepts and measurements referring to these terms vary, but a few commonly used concepts were identified. The review classifies the approaches used for exploring the relationship between CTN and PEB into four categories. The review indicates that the interconnection between CTN and PEB is mostly studied as a part of the wider concept. Approximately half of the reviewed articles explored the actual exposure to some natural environment or nature activity either directly or indirectly. Forests only played a small role as a natural environment in the reviewed articles.
Summary Forests appear to be of very little weight or under-represented in CTN and PEB literature as an explicitly identified natural environment. Results also indicate that the human-forest relationship has not been defined precisely in empirically based scientific literature. The paper discusses implications for the future research focusing on emphasizing the role of forests as natural environments in the research of CTN and PEB.