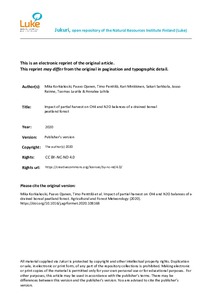 Rotation forestry including clearcutting is a common method of practising forestry in Fennoscandia. Clearcutting in peatland forests markedly increases environmental loading: leaching of nutrients and methane (CH4) and nitrous oxide (N2O) fluxes from soil. Continuous cover forestry has been suggested as an alternative because it does not include clearcutting but partial harvesting. However, impacts of partial harvesting on greenhouse gas fluxes are not well understood and in peatlands have not been studied at all. We conducted a partial harvest by removing 70% of the total stem volume in a mature nutrient-rich peatland forest in Southern Finland. The aim was to investigate how partial harvesting a peatland forest affects CH4 and N2O balances, and how much different surface types contribute to the balances. We used automatic and manual chamber methods to measure fluxes from both harvest and uncut control site. Fluxes were measured from the forest floor, logging trails, and ditches. Fluxes from these surface types were upscaled to obtain net ecosystem-level fluxes during two post-harvest summers (June–August 2016 and 2017). After the harvest, forest floor CH4 fluxes did not change significantly at the harvested site compared to the control site. However, fluxes at logging trails increased significantly. N2O fluxes increased at the harvest site in the post-harvest years, but so did those at the control site as well. Upscaling CH4 fluxes to ecosystem-level indicated that despite their small area (2.4%), emissions from ditches could be large on ecosystem-scale, but their uncertainty was high, while the logging trail CH4 fluxes (20% of the total area) were small. In contrast, N2O fluxes from ditches were low, but the logging trail fluxes comprised 35–38% of the total surface balance. The overall conclusion is that partial harvesting did not cause considerable changes in CH4 and N2O fluxes from a forestry-drained peatland.