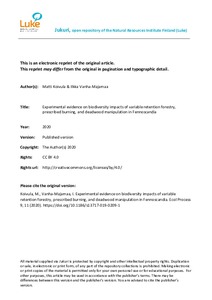 Intensive forest management has been applied in most Fennoscandian forests for a period of almost one felling rotation. This paradigm has produced even-aged and even-structured forests of different successional stages that cover about 90% of forest land. At the same time, wildfires have been nearly eliminated in most of the Fennoscandian nature. Consequently, hundreds of species are red-listed because of forest management. To support these species, forest management requires improvements. Variable retention forestry and habitat restoration have been suggested to mitigate negative effects of forest management on biodiversity, and these have been practiced to some extent during the past few decades. Here, we review experimental results on the effects of variable retention and two restoration measures (prescribed burning and artificial addition of coarse woody debris) on different species groups in Fennoscandia. Our key findings are as follows: (i) Many species respond positively to felling within a few years, apparently due to released and often ephemeral resources, such as fresh residue and stumps. Species associated with shady conditions are negatively impacted, but any retention supports many of these, and their species composition remains almost unaffected with 50–70% retention of the initial tree volume. (ii) These effects remain detectable for at least 10–30 years or, according to some studies, nearly 100 years, e.g., in polypore fungi. (iii) Initial effects of prescribed burning on most species groups (apart from pyrophiles) are negative, but within 10–15 years post-fire sites begin to support many rare and threatened deadwood-dependent species. Epiphytic lichens, however, remain negatively affected. (iv) Artificial addition of deadwood (mostly high stumps) supports a wide spectrum of deadwood-dependent species, but the species composition differs from that of naturally died trees. (v) Moisture and micro-habitat variation are crucial for forest species at harvested sites, at least in forests dominated by Norway spruce. We conclude that felling method as such is of little importance for threatened forest species, although retention mitigates many negative effects. These species require microclimatic continuity, and maintenance and active increase of legacies, such as deadwood of different qualities (species, downed/standing, snag/log/stump, decay stage), very old trees, and tree species mixtures.