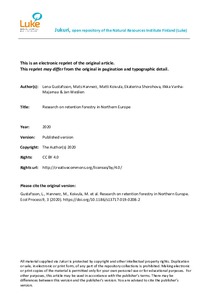 Retention approaches in forest management are today common in several North European countries, integrated into the clearcutting practice as a way to promote biodiversity and maintain ecosystem functions. Individual green trees and retention patches (tree groups) are retained at final harvest, and deadwood is left at site or created. Here, we review research on retention in Sweden, Finland, Norway, the Baltic States, and NW Russia, with special focus on biodiversity. Following the first publication in 1994, about 180 peer-reviewed articles have been published. We present results from a systematic search of the retention literature, separated into the following topics: buffer zones, retention patches, high stumps, other types of deadwood, European aspen Populus tremula, and cost-efficiency. Russian literature is synthesized separately since studies from this region have so far almost exclusively been published in the Russian language. Furthermore, we describe six ongoing large-scale, replicated experiments with varying retention levels, five in Finland and one in Sweden, and summarize their main results. Among main conclusions for practice from the literature and experiments are that retention patches as large as 0.5 ha and 10-m-wide buffers to watercourses are not enough to maintain pre-harvest species composition but survival of forest species is still larger than on conventional clearcuts. Deadwood on clearcuts may present important habitats to saproxylic species, including rare and red-listed ones and a prioritization of tree species per stand is recommended. We identify several important future research directions including switch of focus towards the landscape as well as the species population level. Surveys in parts of European Russia where retention has been unintentionally implemented already for a century would indicate possible future trajectories of biodiversity and their drivers in other regions of Northern Europe. A stronger link to ecological theory would help in study designs and in the formulation of predicted outcomes.