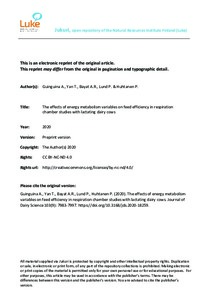 The objective of the present study was to investigate factors related to variation in feed efficiency (FE) among cows. Data included 841 cow/period observations from 31 energy metabolism studies assembled across 3 research stations. The cows were categorized into low-, medium-, and high-FE groups according to residual feed intake (RFI), residual energy-corrected milk (RECM), and feed conversion efficiency (FCE). Mixed model regression was conducted to identify differences among the efficiency groups in animal and energy metabolism traits. Partial regression coefficients of both RFI and RECM agreed with published energy requirements more closely than cofficients derived from production experiments. Within RFI groups, efficient (Low-RFI) cows ate less, had a higher digestibility, produced less methane (CH4) and heat, and had a higher efficiency of metabolizable energy (ME) utilization for milk production. High-RECM (most efficient) cows produced 6.0 kg/d more of energy-corrected milk (ECM) than their Low-RECM (least efficient) contemporaries at the same feed intake. They had a higher digestibility, produced less CH4 and heat, and had a higher efficiency of ME utilization for milk production. The contributions of improved digestibility, reduced CH4, and reduced urinary energy losses to increased ME intake at the same feed intake were 84, 12, and 4%, respectively. For both RFI and RECM analysis, increased metabolizability contributed to approximately 35% improved FE, with the remaining 65% attributed to the greater efficiency of utilization of ME. The analysis within RECM groups suggested that the difference in ME utilization was mainly due to the higher maintenance requirement of Low-RECM cows compared with Medium- and High-RECM cows, whereas the difference between Medium- and High-RECM cows resulted mainly from the higher efficiency of ME utilization for milk production in High-RECM cows. The main difference within FCE (ECM/DMI) categories was a greater (8.2 kg/d) ECM yield at the expense of mobilization in High-FCE cows compared with Low-FCE cows. Methane intensity (CH4/ECM) was lower for efficient cows than for inefficient cows. The results indicated that RFI and RECM are different traits. We concluded that there is considerable variation in FE among cows that is not related to dilution of maintenance requirement or nutrient partitioning. Improving FE is a sustainable approach to reduce CH4 production per unit of product, and at the same time improve the economics of milk production.