Between-cow variation in the components of feed efficiency 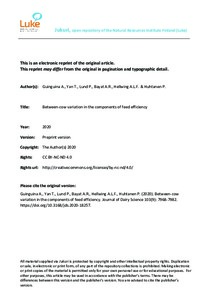 A meta-analysis based on an individual-cow data set was conducted to investigate between-cow variations in the components and measurements of feed efficiency (FE) and to explore the associations among these components. Data were taken from 31 chamber studies, consisting of a total of 841 cow/period observations. The experimental diets were based on grass or corn silages, fresh grass, or a mixture of fresh grass and straw, with cereal grains or by-products as energy supplements, and soybean or canola meal as protein supplements. The average forage-to-concentrate ratio across all diets on a dry matter basis was 56:44. Variance component and repeatability estimates of FE measurements and components were determined using diet, period, and cow within experiment as random effects in mixed procedures of SAS (SAS Institute Inc., Cary, NC). The between-cow coefficient of variation (CV) in gross energy intake (GE; CV = 0.10) and milk energy (El) output as a proportion of GE (El/GE; CV = 0.084) were the largest among all component traits. Similarly, the highest repeatability estimates (≥0.50) were observed for these 2 components. However, the between-cow CV in digestibility (DE/GE), metabolizability [metabolizable energy (ME)/GE], methane yield (CH4E/GE), proportional urinary energy output (UE/GE), and heat production (HP/GE), as well as the efficiency of ME use for lactation (kl), were rather small. The least repeatable component of FE was UE/GE. For FE measurements, the between-cow CV in residual energy-corrected milk (RECM) was larger than for residual feed intake (RFI), suggesting a greater possibility for genetic gain in RECM than in RFI. A high DE/GE was associated with increased CH4E/GE (r = 0.24), HP/GE (r = 0.12), ME/GE (r = 0. 91), energy balance as a proportion of GE (EB/GE; r = 0.35), and kl (r = 0.10). However, no correlation between DE/GE and GE intake or UE/GE was observed. Increased proportional milk energy adjusted to zero energy balance (El(0)/GE) was associated with increases in DE/GE, ME/GE, EB/GE, and kl but decreases in UE/GE, CH4E/GE, and HP/GE, with no effect on GE intake. In conclusion, several mechanisms are involved in the observed differences in FE among dairy cows, and reducing CH4E yield (CH4E/GE) may inadvertently result in reduced GE digestibility. However, the selection of dairy cows with improved energy utilization efficiencies offers an effective approach to lower enteric CH4 emissions.