The effect of winter weather on timber truck tare weights 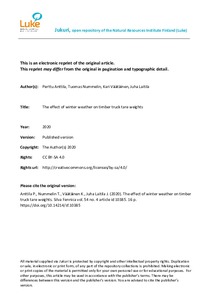 In wintertime, the payload capacity of a timber truck is reduced by snow that accumulates on the structures of the truck. The aim of this study was to quantify the potential payload loss due to snow and winter accessories and to predict the loss with weather variables. Tare weights of eight timber trucks were collected at mill receptions in Finland over a one-year period. Monthly and annual loss of potential payload was estimated using the tare measurements in summer months as a reference. Each load was also connected with weather data at the location and time of delivery and payload loss explained by the weather data with the aid of regression models. The maximum loss of payload varied between 1560 kg and 3100 kg. On a monthly basis, the highest losses occurred in January, when the median values varied between 760 kg and 2180 kg. Over the year, the payload loss ranged between the trucks from 0.5% to 1.5% (from 1.9% and 5.1% in January) of the total number of loads in the study. Payload loss was found to increase with decreasing temperature, increasing relative humidity and increasing precipitation. Although the average payload loss was not very high, the biggest losses occur just during the season of highest capacity utilization. Big differences were also found in the tare weights between the trucks. The results of the study give incentive to develop truck and trailer structures that reduce the adherence of snow.