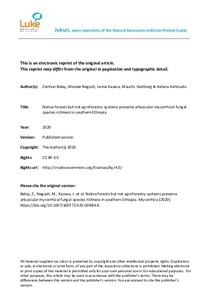 The rapid conversion of native forests to farmland in Ethiopia, the cradle of biodiversity, threatens the diversity of the arbuscular mycorrhizal fungi (AMF) pivotal to plant nutrition and carbon sequestration. This study aimed to investigate the impact of this land-use change on the AMF species composition and diversity in southern Ethiopia. Soil samples were collected fromnine plots in each of three land-use types: native forest, agroforestry, and khat monocropping. The plots of the three land-use types were located adjacent to each other for each of the nine replicates. Three 10 × 10m subplots per plot were sampled. AMF spores were extracted from the soil samples, spore densities were determined, and species composition and diversity were evaluated through morphological analysis. Both spore density and species richness were statistically significantly higher in the native forest than in the agroforestry plots with no clear difference to khat, whereas the true diversity (exponential of Shannon–Wiener diversity index) did not differ among the three land-use types due to high evenness among the species in agroforestry. In total, 37 AMF morphotypes belonging to 12 genera in Glomeromycota were found, dominated by members of the genera Acaulospora and Glomus. The highest isolation frequency index (78%) was recorded for Acaulospora koskei from native forest. Consequently, the agroforestry system did not appear to aid in preserving the AMF species richness of native forests relative to perennial monocropping, such as khat cultivation. In contrast, the native forest areas can serve as in situ genetic reserves of mycorrhizal symbionts adapted to the local vegetative, edaphic, and microbial conditions.