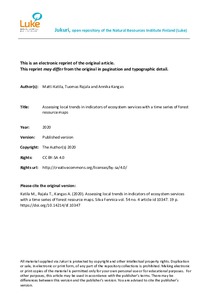 Since the 1990’s, forest resource maps and small area estimates have been produced by combining national forest inventory (NFI) field plot data, optical satellite images and numerical map data using a non-parametric k-nearest neighbour method. In Finland, thematic maps of forest variables have been produced by the means of multi-source NFI (MS-NFI) for eight to ten times depending on the geographical area, but the resulting time series have not been systematically utilized. The objective of this study was to explore the possibilities of the time series for monitoring the key ecosystem condition indicators for forests. To this end, a contextual Mann-Kendall (CMK) test was applied to detect trends in time-series of two decades of thematic maps. The usefulness of the observed trends may depend both on the scale of the phenomena themselves and the uncertainties involved in the maps. Thus, several spatial scales were tested: the MS-NFI maps at 16 × 16 m2 pixel size and units of 240 × 240 m2, 1200 × 1200 m2 and 12  000 × 12  000 m2 aggregated from the MS-NFI map data. The CMK test detected areas of significant increasing trends of mean volume on both study sites and at various unit sizes except for the original thematic map pixel size. For other variables such as the mean volume of tree species groups, the proportion of broadleaved tree species and the stand age, significant trends were mostly found only for the largest unit size, 12  000 × 12  000 m2. The multiple testing corrections decreased the amount of significant p-values from the CMK test strongly. The study showed that significant trends can be detected enabling indicators of ecosystem services to be monitored from a time-series of satellite image-based thematic forest maps.