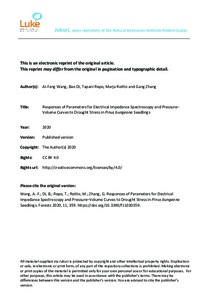 Background and Objectives: Drought occurs more frequently in Northern China with the advent of climate change, which might increase the mortality of tree seedlings after afforestation due to hydraulic failure. Therefore, investigating water relations helps us understand the drought tolerance of tree seedlings. Electrical impedance spectroscopy (EIS) is widely used to assess the responses of plant tissues to stress factors and may potentially reveal the water relations of cells. The aim of this study is to reveal the relationships between EIS and water related parameters, produced by pressure–volume (PV) curves in lacebark pine (Pinus bungeana Zucc.) seedlings reacting to drought stress. Materials and Methods: Four-year-old pot seedlings were divided into three parts (0, 5, and 10 days of drought) before planting, the treated seedlings were then replanted, and finally exposed to post-planting drought treatments with the following soil relative water contents: (i) adequate irrigation (75%–80%), (ii) light drought (55%–60%), (iii) moderate drought (35%–40%), and (iv), severe drought (15%–20%). During the post-planting growth phase, the EIS parameters of needles and shoots, and the parameters of PV curves, were measured coincidently; thus, the correlations between them could be obtained. Results: The extracellular resistance (re) of needles and shoots were substantially reduced after four weeks of severe post-planting drought stress. Meanwhile, the osmotic potential at the turgor-loss point (ψtlp) and the saturation water osmotic potential (ψsat) of shoots decreased after drought stress, indicating an osmotic adjustment in acclimating to drought. The highest correlations were found between the intracellular resistance (ri) of the shoots and ψtlp and ψsat. Conclusions: EIS parameters can be used as a measure of drought tolerance. The change in intracellular resistance is related to the osmotic potential of the cell and cell wall elasticity. Extracellular resistance is a parameter that shows cell membrane damage in response to drought stress in lacebark pine seedlings.