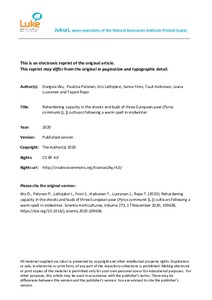 traits that affect the survival, growth and productivity of the European pear (Pyrus communis [L.]) cultivars in
northern countries. The frost hardiness (FH) of shoots of three pear cultivars were studied by a series of freezing
tests, after sampling in natural conditions, after dehardening in a growth chamber at 5 °C for 3–4 days (D1) and
16 days (D2), and then after rehardening at −7 °C for 5–7 days (R1 and R2). The FH was assessed by a differential
thermal analysis (DTA) to measure the low temperature exotherm (LTE) of shoots, by relative electrolyte
leakage (REL) of shoots and by visual damage scoring (VD) of shoots and buds.
According to the DTA, the FH of the cultivars varied between −38 °C (‘Conference’ in D2) and −41 °C (‘Pepi’
in R2). The shoots of the cultivar ‘Pepi’ and ‘Conference’ had the highest and the lowest FH, respectively, in all
conditions and methods. All the cultivars had the lowest shoot FH after dehardening in either D1 (between
−26 °C and −30 °C by REL and between −28 °C and −30 °C by VD) or D2 (between −38 °C and −40 °C by
DTA), and the highest FH after rehardening (R1) preceded by D1 (between −30 °C and −34 °C by REL, and
between −29 °C and −32 °C by VD). After the dehardening in D1, the buds did not reharden but continued to
deharden (the average FH by VD−24.5 °C). In the forcing conditions, bud growth was resumed most rapidly in
‘Conference’, indicating a shallower dormancy in this cultivar than in ‘Pepi’ or ‘Clara Frijs’. We conclude that the
pear cultivars responded to temperature changes in mid-winter, but less than expected, and the responses were
similar in all cultivars.