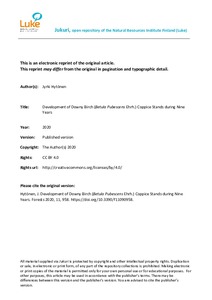 Growing of dense, naturally regenerated downy birch stands using rotations of 24–26 years has been shown to be profitable. Coppicing would be a low-cost regeneration method, however, knowledge on the development of birch coppices is scarce. The height, stem number, and biomass development of sprouts originating from six clearcut stands in three age classes (A: 10–12 years, B: 15–16 years, C: 22–24 years) located in northern Finland was studied. Equations for estimating the aboveground biomass from height were developed for sprouts. The number of sprouts, and their height and biomass were measured annually during nine growing seasons. In addition, sprout damage was assessed. The number of sprouts per hectare was highest in the youngest age class (A) throughout the study period, even though the decrease in the number of stems due to self-thinning was also fastest (from 591,000 sprouts per ha to 105,000 sprouts per ha). The stand age class did not have an effect on either the mean (2.7 m) or dominant height (5.4 m) of birch sprouts. The total leafless above-ground biomass, the mean annual increment (MAI), and the current annual increment (CAI) were highest in the youngest stand age class (A) and lowest in the oldest age class (C). After 9 years, the biomass in the oldest age class was 15.1 Mg ha−1 and 31.1 Mg ha−1 in the youngest age class. During the first six years, the biomass of the sprouts correlated with the number of stumps. A higher number of stumps produced more sprouts and biomass in the first years. However, due to faster self-thinning in the densest stands and higher mass of average sprout in the oldest stands, the correlation between the number of stumps and biomass decreased with the increase of age so that it was no longer significant in years 7, 8, and 9. In the older stand age classes, the MAI increased with the increase of the age of sprouts. The CAI varied considerably between the study years. The study showed that due to coppice vigor, growth of the birch sprouts can be high.