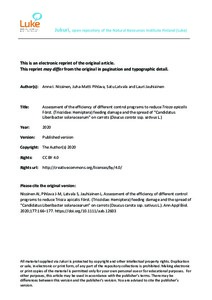 The control of carrot psyllid Trioza apicalis Förster largely relies on chemical measures, and the current integrated pest management (IPM) strategy is based on pest scouting. The number of active ingredients available for psyllid control will further decline in the coming years. The need for alternative control measures is therefore urgent. In this work the efficiency of different control programs including a kaolin particle film and plant‐derived, crude saponin extract, chemical control, insect net and IPM (kaolin in combination with insecticides) programs to reduce psyllid feeding damage, reproduction and the spread of “Candidatus Liberibacter solanacearum” (CLso) in carrots was studied. Each year in 2016–2018, four replicates of each treatment were randomised in a row‐column design on a commercial carrot farm. After the treatments were executed, the psyllid nymphs and eggs were counted. At the harvest, the carrot roots and shoots were weighed, damages assessed, and samples were taken for CLso detection from 50 plants at each replicate. Kaolin treatment alone and in combination with insecticides effectively reduced the number of psyllid nymphs and eggs in all the years studied. Saponin was applied only on the first year, since it significantly increased the number of T. apicalis eggs compared to other treatments. The insect net was superior to other treatments in all the studied aspects in all the years. Under normal weather conditions, the highest root weight was harvested under the insect net, followed by the chemical control program consisting of pyrethroids, kaolin treatment, untreated control and saponin treatment. During extreme weather conditions, chemical control programs were not effective at protecting the carrots from psyllid feeding, which was reflected as low root yield. In all years, the carrot leaf damage percent negatively correlated with the root weight. Similarly, the shoot:root ratio increased as the leaf‐curling percentage rose, which was even pronounced under drought stress. The effect of climatic stress should be considered when developing IPM strategies.