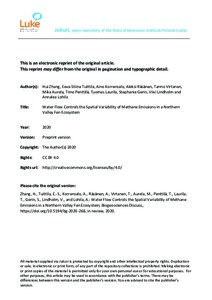 Northern peatlands are projected to be crucial in future atmospheric methane (CH4) budgets and have a positive feedback on global warming. Fens receive nutrients from catchments via inflowing water and are more sensitive than bogs to climate change-caused variations in their ecohydrology. Yet, due to a lack of data detailing the impacts of moving water on microhabitats and CH4 fluxes in fens, there remains large uncertainties in predicting CH4 emissions from these sites. We measured CH4 fluxes with manual chambers over three growing seasons (2017–2019) at a northern boreal fen. To address the spatial variation at the site where a stream flows through the long and narrow valley fen, we established sample plots at varying distances from the stream. To link the variations in CH4 emissions to environmental controls, we quantified water levels, peat temperature, dissolved oxygen concentration, vegetation composition and leaf area index in combination with flux measurements during the growing season in 2019. We found that due to the flowing water, there was a higher water level, lower peat temperatures, and more oxygen in the peat close to the stream, which also had the highest total leaf area and gross primary production (GPP) values but the lowest CH4 emissions. Further from the stream, the conditions were drier and produced low CH4 emissions. In contrast, CH4 emissions were highest at an intermediate distance from the stream where the oxygen concentration in the surface peat was low but GPP was still high. Our results emphasise the key role of ecohydrology in CH4 dynamics in fens, and for the first time show how a stream controls CH4 emissions in a flow-through fen. As valley fens are common peatland ecosystems from the arctic to the temperate zones, future projections of global CH4 budgets need to take flowing water features into account.