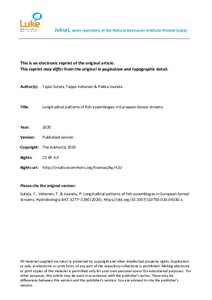 Fish assemblages are known to change from headwaters to river outlets. Still, our knowledge of this change is often approximate or sporadic. In this study, we quantified the average longitudinal change from a large electrofishing data set of boreal streams in Northern Europe. The average species richness increased from headwaters to medium-sized rivers but levelled off when reaching large rivers. Existence of some headwater specialist fish species, e.g. brook trout (Salvelinus fontinalis), was interpreted to support the fish zonation concept over the concept of accumulative addition of species downstream. The traditional fish zonation concept developed in Western Europe suggests four zones from headwaters to river outlets, the trout zone, the grayling zone, the barbel zone and the bream zone. Of these, only the trout zone was clearly present with a high dominance in the headwaters of the streams studied. For the North European boreal streams, we suggest a zonation concept with three dominating fish species from headwaters downstream, brown trout (Salmo trutta), bullhead (Cottus gobio) and Atlantic salmon (Salmo salar). Discovered longitudinal shifts in fish guild compositions offered an opportunity for an ecological interpretation of the data and a promising basis for bioassessment.