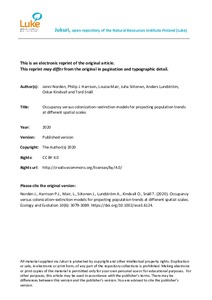 Understanding spatiotemporal population trends and their drivers is a key aim in population ecology. We further need to be able to predict how the dynamics and sizes of populations are affected in the long term by changing landscapes and climate. However, predictions of future population trends are sensitive to a range of modeling assumptions. Deadwood‐dependent fungi are an excellent system for testing the performance of different predictive models of sessile species as these species have different rarity and spatial population dynamics, the populations are structured at different spatial scales, and they utilize distinct substrates. We tested how the projected large‐scale occupancies of species with differing landscape‐scale occupancies are affected over the coming century by different modeling assumptions. We compared projections based on occupancy models against colonization–extinction models, conducting the modeling at alternative spatial scales and using fine‐ or coarse‐resolution deadwood data. We also tested effects of key explanatory variables on species occurrence and colonization–extinction dynamics. The hierarchical Bayesian models applied were fitted to an extensive repeated survey of deadwood and fungi at 174 patches. We projected higher occurrence probabilities and more positive trends using the occupancy models compared to the colonization–extinction models, with greater difference for the species with lower occupancy, colonization rate, and colonization:extinction ratio than for the species with higher estimates of these statistics. The magnitude of future increase in occupancy depended strongly on the spatial modeling scale and resource resolution. We encourage using colonization–extinction models over occupancy models, modeling the process at the finest resource‐unit resolution that is utilizable by the species, and conducting projections for the same spatial scale and resource resolution at which the model fitting is conducted. Further, the models applied should include key variables driving the metapopulation dynamics, such as the availability of suitable resource units, habitat quality, and spatial connectivity.