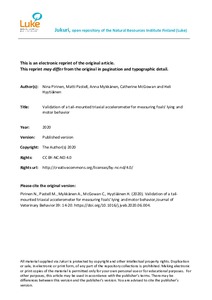 Foals' locomotory and lying-down behavior can be an indicator of their health and development. However, measurement tools have not been well described with previously reported attachment sites used on limbs of adult horses unsafe for longer-term data collection in foals. In this study, a tail-mounted three-dimensional accelerometer was validated for monitoring foals lying, standing, and walking behavior. Eleven foals were recruited: four hospitalized and seven at private breeding stables. Accelerometers were attached to the dorsal aspect of the base of each foal's tail and their behavior was video recorded. Hospitalized foals had continuous video monitoring inside their stalls, and the breeding stable's foals were monitored outside at pasture for 1-5 periods (mean 42 minutes per period), depending how long they were at the facility. Acceleration was measured using 100 Hz frequency and mean, maximum, and minimum acceleration were recorded in 5 second epochs for x-, y-, and z-axes. Lying, standing, and walking behavior was monitored from videos of all foals, and the start and end time of each behavior was compared with the corresponding data from the accelerometer. Naive Bayes classifier was developed by using dynamic body acceleration and craniocaudal movement of the tail (tilt along z-axis), to predict a foal's lying behavior.

The model was validated; the classifier achieved high accuracy in precision and in classifying foals' lying behavior (specificity, 0.92; sensitivity, 0.89; precision, 0.98; accuracy, 0.92). The overall accuracy for classifying walking and standing was also good, but the precision was poor (0.46 and 0.24, respectively). When standing and walking behavior was combined to a single “standing or walking” class, the precision improved (specificity, 0.62; sensitivity, 0.92; precision, 0.89; accuracy, 0.92). In conclusion, tail-mounted three-dimensional accelerometer can be used for monitoring foals' lying behavior. In addition, information regarding standing and walking can be gained with this method.