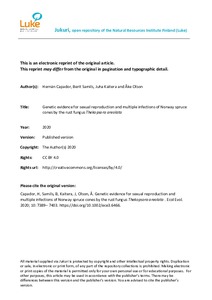 Rust fungi are obligate parasites, of plants, with complex and in many cases poorly known life cycles which may include host alteration and up to five spore types with haploid, diploid, and dikaryotic nuclear stages. This study supports that Thekopasora areolata , the causal agent of cherry‐spruce rust in Norway spruce, is a macrocyclic heteroecious fungus with all five spore stages which uses two host plants Prunus padus and Picea abies to complete its life cycle. High genotypic diversity without population structure was found, which suggests predominantly sexual reproduction, random mating and a high gene flow within and between the populations in Fennoscandia. There was no evidence for an autoecious life cycle resulting from aeciospore infection of pistillate cones that would explain the previously reported rust epidemics without the alternate host. However, within cones and scales identical multilocus genotypes were repeatedly sampled which can be explained by vegetative growth of the fertilized mycelia or repeated mating of mycelium by spermatia of the same genotype. The high genotypic diversity within cones and haplotype inference show that each pistillate cone is infected by several basidiospores. This study provides genetic evidence for high gene flow, sexual reproduction, and multiple infections of Norway spruce cone by the rust fungus T. areolata which expands the general understanding of the biology of rust fungi.