Responses of food web to hypolimnetic aeration in Lake Vesijärvi 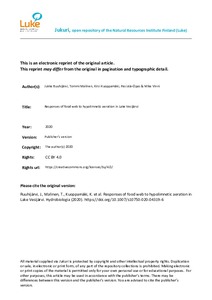 We studied the responses of a food web, especially fish and zooplankton, to summertime aeration, pumping of oxygen-rich epilimnetic water to the hypolimnion in Lake Vesijärvi, southern Finland. The aim of hypolimnetic aeration was to reduce internal loading of phosphorus from sediment. The population of smelt (Osmerus eperlanus L.), the main planktivore of the pelagial area, collapsed during the two 1st years of aeration due to increased temperature and low oxygen concentrations in the hypolimnion. The population recovered after the 4th year of hypolimnetic aeration, when oxygen conditions were improved. Despite elevated hypolimnetic temperature, smelt reached exceptionally high abundance, which led to a significant reduction in cladoceran body size. The density of perch (Perca fluviatilis L.) increased at first, but then decreased when the proportion of smelt and cyprinids increased. Biomasses of Daphnia decreased probably as a result of the disappearance of dark, low-oxygen deep-water refuge against fish predation and low availability of nutritionally high-quality algae. Occasionally filamentous cyanobacteria, such as turbulence tolerant Planktothrix agardhii (Gomont), were abundant, suggesting deteriorated food resources for zooplankton. The responses of food web were controversial with respect to the aim of the management, which was to prevent the occurrence of harmful algal blooms.