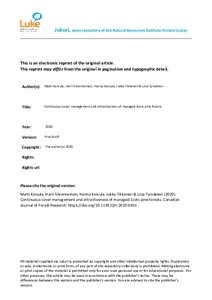 Forest management, characterized in many Northern countries by the predominance of clear cutting and growing even-aged and -sized trees, has simplified the structure of boreal forests. Consequences include alterations in cultural ecosystem services, such as forest attractiveness, i.e., combined aesthetic and recreational values. Continuous-cover forestry might mitigate these effects through the use of selection and gap cutting, but these methods have been little studied, particularly from the attractiveness viewpoint. We used photo surveys to assess Finnish citizens' perceptions of attractiveness of in-stand sceneries of Scots pine (Pinus sylvestris) forests logged using different methods. (1) The attractiveness scores, given by respondents, declined steadily from unharvested forest through continuous-cover methods to seed-tree and clear cutting. (2) Respondents with a negative attitude to forest management gave lower scores than respondents with a positive attitude, but the declining slopes of attractiveness against logging intensity were similar. (3) In unharvested and less intensively managed stands, summer photos received higher scores than corresponding winter photos. (4) Background variables (gender, education, living environment, memberships in recreational or nature NGOs, forestry profession and forest ownership) had negligible effects on the scores. We recommend the use of continuous-cover logging methods in settlement and recreational areas.