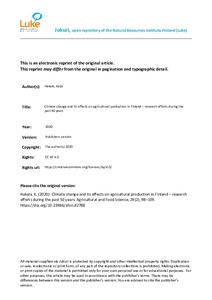 Climate change has concerned the scientific community since the 1970´s, stimulating research into its impacts, adaptation and mitigation. In 1988 the Intergovernmental Panel on Climate Change (IPCC) was established to coordinate the research. The first scientific publications on the effects of climate change on agriculture and forestry in Finland appeared in the early 1980´s. After the launch of the Finnish Research Program on Climate Change (SILMU) in 1990, the number of climate-related projects and publications, and the input of Finnish researchers in the work of the IPCC started to increase. During the subsequent programs, the initial optimism about future crop production conditions changed into an awareness of the threats represented by climate change. Diversity of production and breeding of heat and flooding tolerant, disease resistant and nutrient-use efficient crop varieties were identified as being crucial for adaptation of agriculture. Efficient water management, measures to limit nutrient leaching and timely control of pests and pathogens are also crucial adaptation measures. Carbon storage in soils and biomass and reduced use of organic fields are suggested to be mitigation measures. By 2019, the awareness of the threats of climate change prompted citizens worldwide to demand action, and government programs have begun to include policies addressing reduction of greenhouse gas emissions.