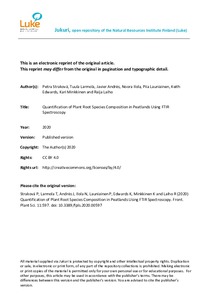 Evidence of plant root biomass and production in peatlands at the level of species or plant functional type (PFT) is needed for defining ecosystem functioning and predicting its future development. However, such data are limited due to methodological difficulties and the toilsomeness of separating roots from peat. We developed Fourier transform infrared (FTIR) spectroscopy based calibration models for quantifying the mass proportions of several common peatland species, and alternatively, the PFTs that these species represented, in composite root samples. We further tested whether woody roots could be classified into diameter classes, and whether dead and living roots could be separated. We aimed to solve whether general models applicable in different studies can be developed, and what would be the best way to build such models. FTIR spectra were measured from dried and powdered roots: both “pure roots”, original samples of 25 species collected in the field, and “root mixtures”, artificial composite samples prepared by mixing known amounts of pure roots of different species. Partial least squares regression was used to build the calibration models. The general applicability of the models was tested using roots collected in different sites or times. Our main finding is that pure roots can replace complex mixtures as calibration data. Using pure roots, we constructed generally applicable models for quantification of roots of the main PFTs of northern peatlands. The models provided accurate estimates even for far distant sites, with root mean square error (RMSE) 1.4–6.6% for graminoids, forbs and ferns. For shrubs and trees the estimates were less accurate due to higher within-species heterogeneity, partly related to variation in root diameter. Still, we obtained RMSE 3.9–10.8% for total woody roots, but up to 20.1% for different woody-root types. Species-level and dead-root models performed well within the calibration dataset but provided unacceptable estimates for independent samples, limiting their routine application in field conditions. Our PFT-level models can be applied on roots separated from soil for biomass determination or from ingrowth cores for estimating root production. We present possibilities for further development of species-level or dead-root models using the pure-root approach.