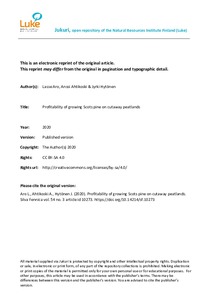 A major after-use option for former peat harvesting areas has been afforestation. The profitability
of afforestation with Scots pine trees (Pinus sylvestris L.) was studied in two 31–32-year
old experiments in southern and northern Finland. The stands were established by seeding and
planting, and various fertilization treatments and drainage intensities were tested. The financial
performance for each plot was assessed in three steps. First, the costs occurred during the measurement
time were summed up according to their present value. Then, for the rest of the rotation
(i.e., from the age of 31/32 onwards) the stand management was optimized in order to maximize
the net present value (MaxNPV). Finally, bare land values (BLVs) were calculated by summing
up the present value of costs and the MaxNPV and converting the sum of the series into infinity.
The afforestation method did not affect the mean annual increment (MAI; 9.2–9.5 m3 ha–1 a–1) in
the southern experiment. In the northern experiment the afforestation method, ditch spacing and
fertilization had significant effects on the MAI of the stands. The average MAI of the planted pines
was 8.9 m3 ha–1 a–1, and for seeded pines it was 7.5 m3 ha–1 a–1. The BLV at an interest rate of
3% was positive for all stands in both regions. In the northern region afforestation method, ditch
spacing and fertilization also had a significant effect on the BLV. When the interest rate was 5%,
almost two thirds of the stands had a negative BLV in both regions.